Europe Day 2019: Vocational training is the key to securing skilled workers in the digital labour market 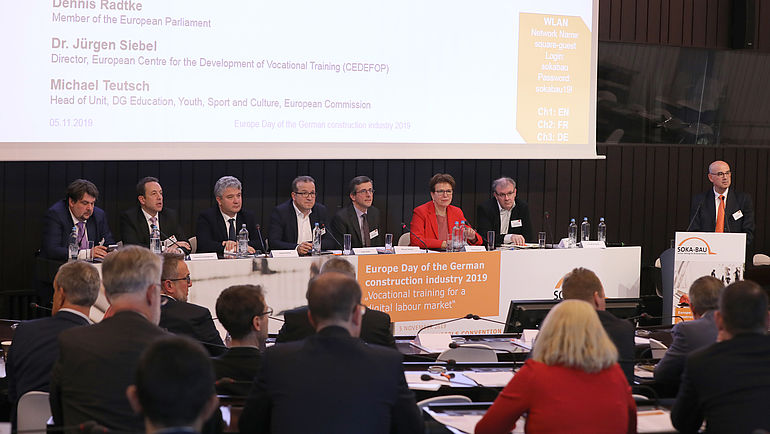 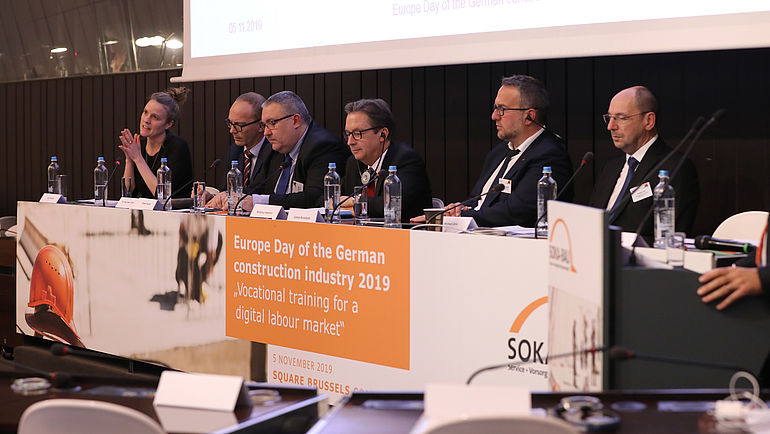 “SOKA-BAU successfully supports the high training standards of the industry by financing modern vocational training in the construction companies and the more than 180 inter-company training centres. Against the trend, the number of vocational training places in the construction industry is growing. Especially in the light of an increasing importance of the digitalisation of professions – also in construction – it is more crucial than ever to train the skilled workers of tomorrow today", emphasized Gregor Asshoff, board member of SOKA-BAU, in his welcome words on the fifth Europe Day of the German construction industry on 5 November 2019. The German construction industry, which is characterised by small and medium-sized enterprises, faces major challenges in view of the rapidly advancing digitalisation and demographic development.

Around 90 invited guests from European institutions, European and national organisations, diplomats and scientists accepted the invitation to the fifth Europe Day of the Germany construction industry in Brussels. Barbara Kauffmann, Director for Employment and Social Governance in the European Commission's Directorate-General for Employment, Social Affairs and Integration, stressed the need for close cooperation between the European and national levels, in particular with the social partners, in order to make the New Skills Agenda for Europe a success: „We have a lot of work to do”.

In two panel discussions, representatives of the German social partners, the EU Commission, the EU agencies, the German Federal Ministry of Labour and Social  Affairs, paritarian institutions and the MEPs Gabriele Bischoff (S&D), Terry Reintke (Greens/EFA) and Dennis Radtke (EPP) discussed both the opportunities for "investment in skills and education" and the interaction of European and national education policy with regard to "parity, digitalisation, integration". The discussion focused on the new EU funding programmes for the period 2021 to 2027: especially the practitioners among the discussants were critical of the bureaucracy involved in applying for funding and the insufficient funding means – for example for the ESF+ and Erasmus+ programmes. On the other hand, the representatives of the European institutions referred to the increase in the funding volume as well as administrative simplifications in the proposals for the future programmes.

An important prerequisite in the professional history of a significant number of young people is their ability to train. "We prepare young people willing to take up vocational training in the construction industry by providing them with entry qualifications through the project “Berufsstart Bau”. We win new groups of people, promote the integration of low-performing young people and refugees and have a positive influence on the image of the industry” said Manfred Purps, board member of SOKA-BAU, in his dinner speech by referring to this successful model of the German construction industry. SOKA-BAU organised the evening event together with AEIP, the European Association of Paritarian Institutions.

SOKA-BAU
SOKA-BAU is a paritarian institution established by the social partners of the German construction industry (Hauptverband der Deutschen Bauindustrie e. V., Industriegewerkschaft Bauen-Agrar-Umwelt and Zentralverband des Deutschen Baugewerbes e. V). It unites two institutions under one roof: the Urlaubs- und Lohnausgleichskasse der Bauwirtschaft (founded in 1949) and the Zusatzversorgungskasse des Baugewerbes AG (founded in 1957). Together these two institutions protect the leave entitlements for domestic and posted blue-collar workers, manage the occupational pension scheme and finance the vocational training scheme for workers and companies in the construction industry.